I wish I was in New Orleans 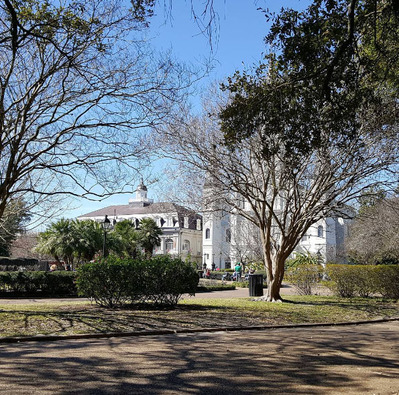 8:46 p.m. February 9, 2016 : St. Charles rests, nary a sign of the handful of Mardis Gras parades, except of the random bead strands, the occasional barricades and side-street Porta-Potties. A homeless man sleeps in an alcove near Avenue Cafe. The neon lights and lit store-fronts illuminate the way for wanderers toward downtown, heralding the decadence and debauchery on Bourbon. Trolley tracks wait for the car to return to service, it's path cleared of trash, and the dirt and soil trodden by a million steps. This city of a thousand ghosts can't be put to rest yet tonight, as there's a few more hours to go before God calls for us to repent, fast and pray to ancient saints and saviors. I won't be partaking in that time-honored tradition of beads for bare tits, but perhaps one day I'll bear witness to this event. Until then I rest and recuperate and prepare for the second Market trip of this vacation and the long drive back home.
​
February 10, 2016: Ash Wednesday, and we are all freed from guilt and sin, washed away like the trashed sidewalks and littered streets. Some of us sleep off the regrets from yesterday, and some walk through the sunlight hugging the Mississippi and its swells. The water laps at the stonework embankment. Today begins the long drive home. Soon, we'll be home, but New Orleans will weigh heavy on my heart for months, maybe years, to come.

Sea changes ~ The road to Homer

I reached the end of my daily road trip in Homer, Alaska. So much of the nightlife and restaurants are built on a sandbar/pier construction, but the down-home mystique of this gorgeous town centers around the waters and sea life. I managed to find a washed-up starfish.

Come out to play

Faces in flame and an Alaskan sunset

This is a series of photos and an audio recording I managed to capture during my trip to the Kenai Peninsula, Alaska, in 2012. The photos edited in post with the help of Rashah McChesney.

This is a series of photos and an audio recording I managed to capture during my trip to the Kenai Peninsula, Alaska, in 2012. Sorry for the spikes at the beginning and ending of the audio, as it was recorded raw to SoundCloud with no editing. You can also clearly hear my shutter clicking away. :/ The photos were edited in post with the help of Rashah McChesney.